The stage lights shone brightly on the Herkimer High School Class of 2018 during their graduation ceremony on June 23.

After a prelude performed by the Herkimer High School Jazz Band, Superintendent Robert Miller welcomed the guests to the high school auditorium for the graduation ceremony. Mr. Miller thanked the family members, teachers, faculty and staff who nurtured the Class of 2018 over the years to become the people they are today.

The graduates were led into the auditorium in a processional led by a bagpipe ensemble from the Mohawk Frasers. High School Principal Mary Tomaso served as master of ceremonies and introduced senior Rebecca Eastwood, who sang the National Anthem. 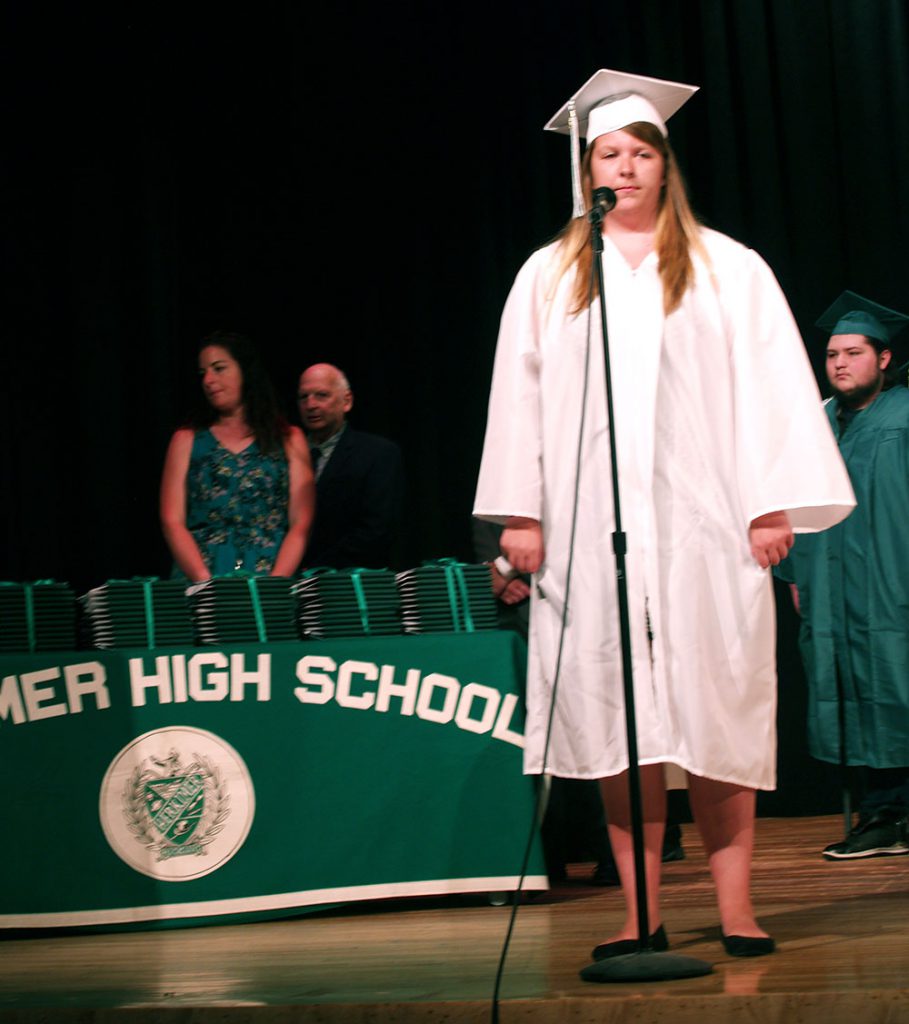 Following the National Anthem, Herkimer Central School Board of Education President Robert Mihevc addressed the graduates, encouraging them to go forth with confidence and self-respect.

“Work hard to reach your goals, and when you get there, reach back to help someone else,” Mr. Mihevc advised.

Salutatorian Zachary Polus was introduced by Mr. John Krause, who praised Zach as a “bright, intelligent, pleasant and enthusiastic” student. The salutatorian’s comments were brief, drawing a few laughs at first, but ending on a positive note as he encouraged his fellow graduates to “do what we’re passionate about, and the world will thank you.”

Senior class adviser Mrs. Kristin Smith introduced class president Nicole Gallagher, reminding the Class of 2018 that many of the activities they enjoyed over the previous year were “all thanks to our ‘Nicky G’.” Mrs. Smith praised Nicole for her diligence, responsibility and work ethic.

In her remarks, Nicole gave special thanks to “anyone who’s ever swept a stage or mowed a field,” acknowledging that without this work, many of her best memories of high school would not have been possible. Nicole encouraged her classmates to “be your own biggest advocate” and not sell themselves short.

Mr. Connor Downing presented valedictorian Jenna Vincent, joking that he used “the Jenna Method” in preparing for his speech: “agonizingly waiting for the last minute.” Observing that “Jenna accomplishes things by never being satisfied,” he encouraged the Class of 2018 to “want more” from themselves and from their life. 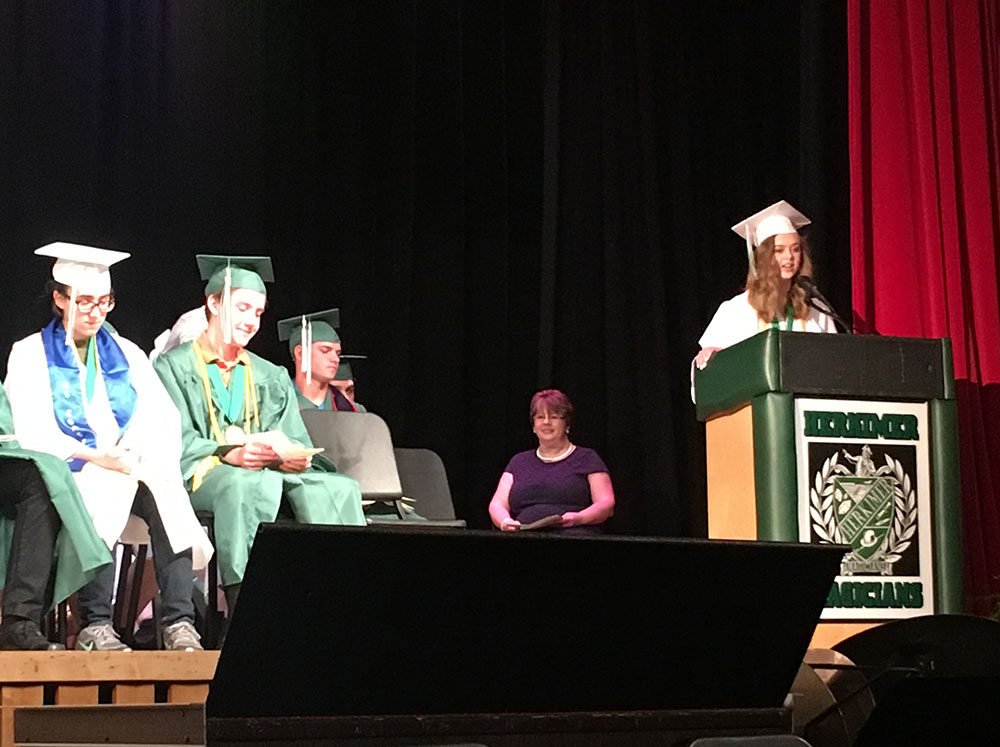 Jenna passed on some advice of her own to her classmates, encouraging them to seek balance, rather than perfection, and to “cultivate not just our minds, but our souls.”

Following the presentation of diplomas, Mrs. Tomaso closed by noting that most of the graduates were students in her first kindergarten class when she began teaching at Herkimer. She left them with lessons from Robert Fulghum’s “All I Really Need To Know I Learned In Kindergarten,” encouraging them to be nice, to share and to stay safe. Also recognized were several retiring district employees.

Following the singing of the Alma Mater by senior Sakacia Brown, the seniors were led in a recessional by the Mohawk Frasers.

View more photos of the Class of 2018 on the Herkimer Central School District Facebook page. 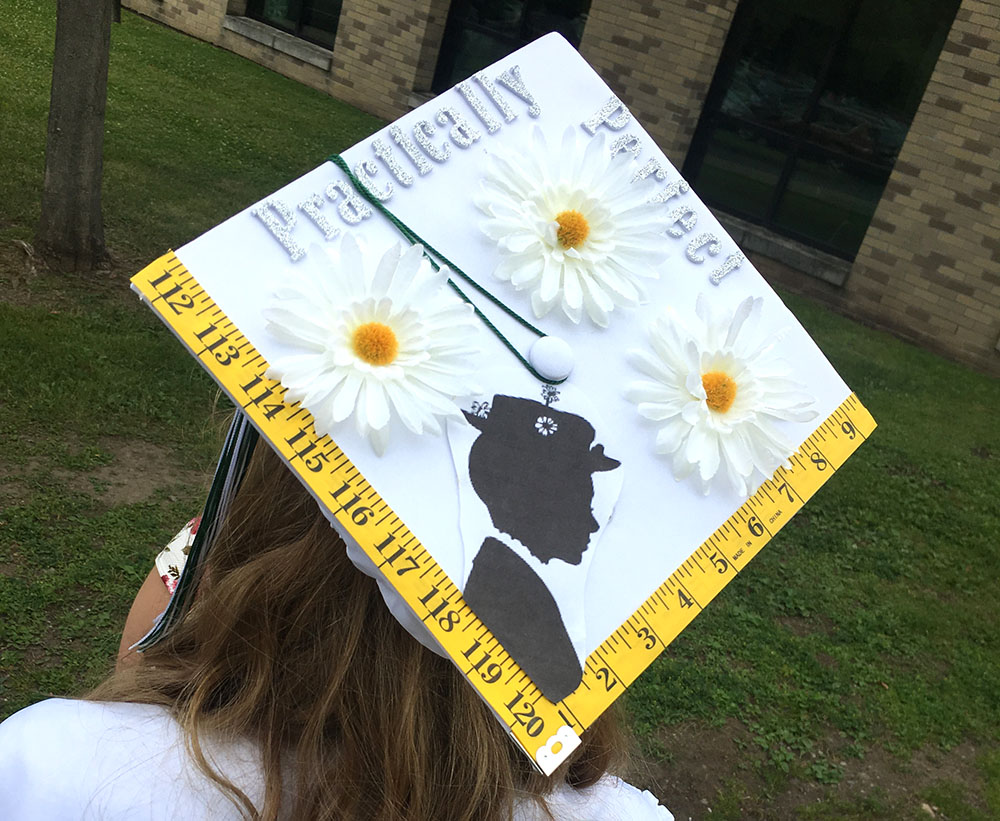