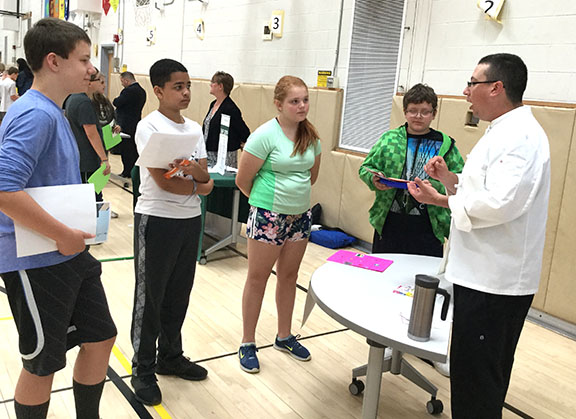 In one corner of the gym, a student was trying on a firefighter’s turnout gear. Across the room, a police robot was stealing a basket of candy from a nearby table. It wasn’t just another day at Herkimer Elementary — it was a college and career fair for fifth- and sixth-graders, organized by school counselor Bridgett Manley.

Each student was given a scavenger hunt-style checklist, and sent to get stickers from the representatives of local colleges and employers that had set up tables around the gym.

“We want to show them that there are great opportunities right here in the area,” Manley explained as she watched students milling around.

“I didn’t become a nurse until I was in my early 20s,” said Melissa Bleaking, a registered nurse who also teaches nursing at Herkimer BOCES. “If I had known more about it earlier, I might have done it sooner.”

By talking one-on-one with professionals, including police officers and firefighters, health professionals and several small business owners, students also got a chance to learn more about what’s really involved in a variety of careers.

For example, deputy fire chief Brian Reile was quick to point out that being a firefighter is about a lot more than fighting fires.

“We’re prepared and trained for a lot of different situations, because we might be called to respond to just about anything,” Reile said.

Clare Burth, a senior counselor at Herkimer College, said she was pleased to have the chance to participate in the event.

“I think it’s good for them to be thinking ahead at this age,” Burth said. “They’re going to be starting to think about this more when they move up to the junior high school, so it’s good to start now.”

Thanks to all the individuals and organizations that participated in College and Career Day, including: