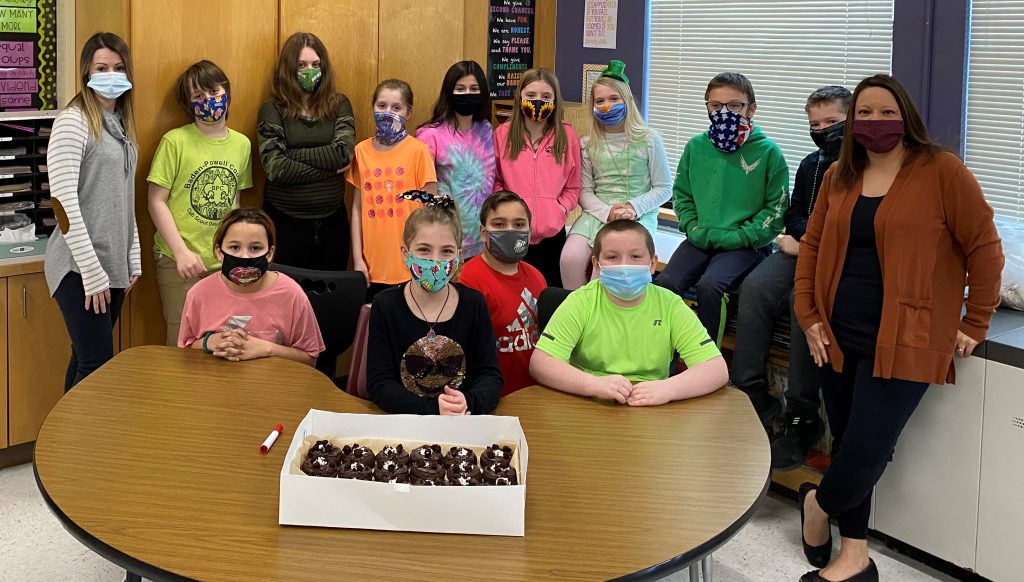 Herkimer Elementary fifth grade student Alaina Hutchinson came up with an idea for a doughnut called “chocolate fudge delight adventure.” And thanks to her persuasive writing skills, the Cakery Café in Dolgeville turned it into a reality.

The students in Barbara Macri’s class recently completed a persuasive writing project where they came up with an idea for a new doughnut and had to sell the idea. They accompanied their writing piece with a list or a picture.

The Cakery Café then picked a winner and created the doughnut for the class. The donut will also be a special at the café through March 27.

The class also picked three winners, which included Hutchinson, Rayanna Gonzalez, who came in second with her “cheesecake fun” doughnut, and Jeremiah Bowen-McLean, who took third with his “rainbow Oreo” creation.

“I’m always looking for something fun to teach the persuasive writing skill, so the kids wrote a lengthy article to persuade the owner of the shop to pick their doughnut,” Macri said.

“They all wrote phenomenal pieces. They were authentic and were able to be very creative.”

Hutchinson said she liked the project for a number of reasons.

“It allowed people to show and bring out their creativity,” she said. “It was also a lot of fun to do.”

There are about 15 students in Macri’s class, and each must write four different writing pieces during the year including the persuasive piece and a research article.

“Some of the words they used to describe the food were amazing. They really love to watch those cooking shows,” she said.

“Overall, they really embraced the project.”