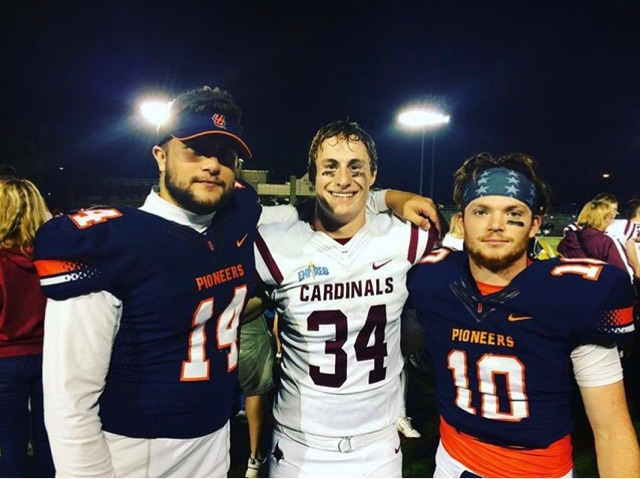 Safety Brennen Thompson, now a junior at St. John Fisher, made his mark in the third quarter, recovering a blocked punt to give the Cardinals an 18-9 lead heading into the fourth quarter.

Wide receiver Zach Steele, a junior at Utica College, had a seven-yard punt return during the game, and has 4 catches for 63 yards this season.

And although fellow Herkimer alum Austin Mills did not play for Utica College that day, he did get a photo op with his two former HHS teammates.

Thompson, Mills and Steele were part of the 2013 Class D championship team, with quarterback Mills being named the MVP in the title game after running for three scores and throwing touchdown passes to Thompson.

Steele, who graduated in 2015 with Thompson, said the three were friends throughout high school and keep in touch.

“We were all very close in high school and keep in touch a lot,” said Mills, who graduated in 2014 and spent two years in prep before coming to Utica College as a third-string quarterback. “I’ll FaceTime Brennan 1-2 times a week.”