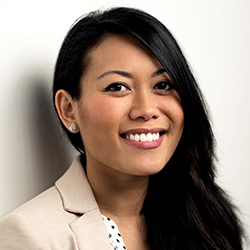 I was involved in the tennis team and also all the musicals, so a lot of my memories were definitely with Mr. Krause — he was a big influence to me, personally and success-wise. He always encouraged me to be better and believe in myself.

What have you been doing since you graduated?

I attended the New England Institute of Art in Boston, and got my Bachelor of Science degree in graphic design. The degree program was a cohesive unit with photography, and I went more into the photography direction — I just kind of fell in love with it. When I explored ways of making a living as a photographer, I discovered wedding photography. What I love about it is that it’s a mixture of everything — photojournalism as well as portraiture — which I loved.

I started out shooting these really tiny backyard weddings, doing maybe five weddings in that first year, then it grew to 30 weddings the next year, and on from there. So that’s what I’ve been doing professionally for the past eight years.

On top of that, I do a lot of personal artwork as well, and I have a contract job with Wellin Museum at Hamilton College, which is also really great. They give me free rein to express myself and take photos in any way possible, and it’s so nice to be in that kind of fine art atmosphere.

Hard work is hard work — it will always pay off. In high school, I wasn’t the best student, but luckily I have been successful business-wise, because I have been working hard.

I would also say don’t take for granted what you have at Herkimer. My husband went to school in Houston, where there were maybe 700 kids in his graduating class. It’s so much easier to have close-knit friends and personal relationships in a school like Herkimer, so I encourage everyone to take advantage of that.