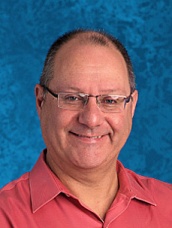 A native of the Mohawk Valley, John Krause has been following a love of music and theater since a young age. It was at New York Mills Junior Senior High School that Krause discovered his love of the stage while watching his older brother Charlie perform in a school play. From there, Krause set his sights on a career that would bring him to Herkimer High School, where he teaches choral music, theater and drama. This fall marks the start of his 20th year of teaching at Herkimer.

Krause was recognized by area civic organization The Genesis Group at the organization’s 2015 Celebration of Education as a Mohawk Valley educator who is making a positive impact on students. In nominating Krause for the award, high school Principal Mary Tomaso wrote that Krause “gives his all for his students and as a result, more than just his students grow, the entire school, village, and music community flourish.”

With a degree in music education from the State University of New York at Potsdam and a master’s degree from Temple University in Philadelphia, Krause has studied voice and piano, accompanying many All-County choruses and the Zone 4 Area All State Chorus.

Outside of the classroom, Krause is an avid musical theater enthusiast, having performed in and directed productions with Stage Two, Players of Utica, Rome Community Theater, Ruckus Productions, Upstagers, The Earlville Opera House and more.

And his enthusiasm is contagious. “The passion, pride and polish that Mr. Krause exudes in his profession are most visible … through the annual musicals, which are the pride of the valley and showcase the talents of our students for the community to appreciate,” Tomaso wrote.

A former student agrees, recalling that her favorite high school memory is “working with Mr. Krause for the musicals and plays.”

Janelle Rodriguez, a 2003 Herkimer graduate and award-winning professional photographer and artist, said of her time at Herkimer that “Looking back … I see where a lot of courage and confidence was built. It was a joy to overcome stage fright by singing, dancing and acting in front of an audience. He taught me to stay positive, move forward, and be courageous.”