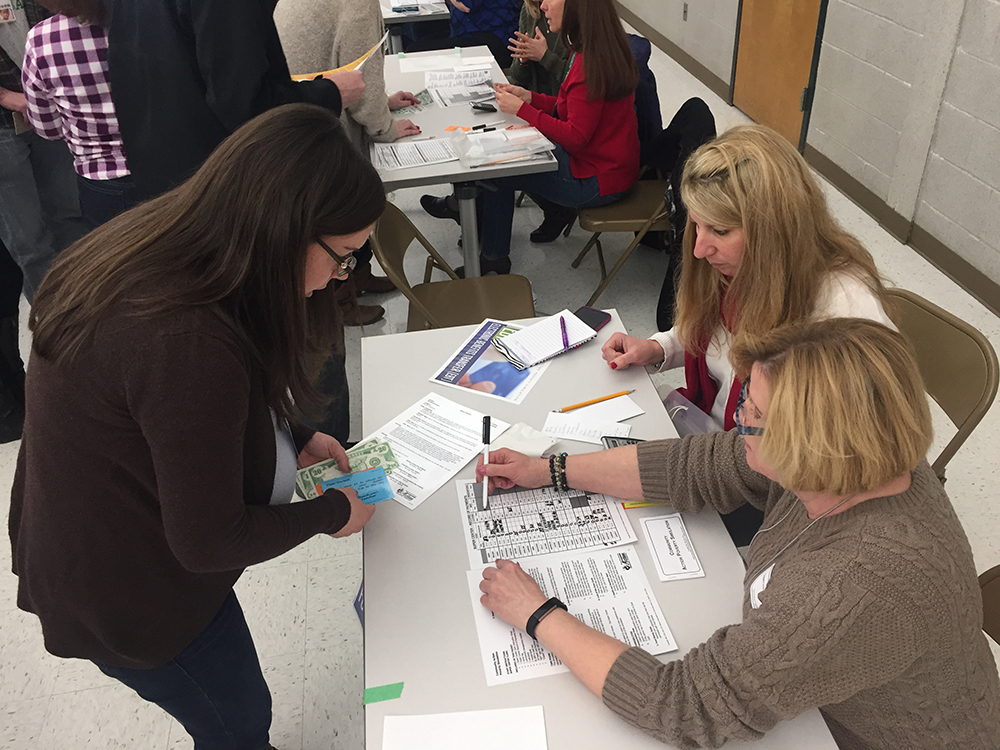 Mrs. Tomaso was on her way back to jail.

Accused of stealing someone’s bus pass, the Herkimer Jr./Sr. High School principal was being escorted to the police station when the arresting officer spotted Mr. Orilio snatching $50 out of someone’s wallet.

The two “suspects” were added to an already crowded “jail” that also housed Mr. Abbe and several other Herkimer staff members.

It wasn’t a crime spree, but a role-playing activity, presented on Monday by the Mohawk Valley Community Action Network and the Mohawk Regional Teacher Center during a recent superintendent’s conference day.

‘Are you going to make the right decisions?’

While students enjoyed a three-day weekend, Herkimer CSD staff got a lesson in what it’s like to live in poverty.

The poverty simulation, explained Teacher Center director Noreen Metz, gives educators the opportunity to walk in someone else’s shoes, even just for a short time.

Developed by the Missouri Community Action Network and based on the real-life experiences of families in poverty, the simulation groups people into “families,” where they role-play one month’s worth of experiences, condensed into a single hour of time. Families must travel to and from work and school, buy groceries, get needed medication and figure out how to handle things like a shutoff notice from the electric company, an eviction notice or a broken-down car.

“Are you going to make the right decisions?” Venice Ervin of the Community Action Network asked Herkimer faculty and staff before the simulation began. “You’ve got to try to maintain without being evicted, losing your children, going hungry — or possibly dying.”

As the simulation began, “families” lined up at tables set up around the room, which represented services: a bank, a grocery store, a check-cashing place, a pawn shop (and the jail).

“Things like day care expenses, transportation — it’s easy to take them for granted,” Metz explained while the simulation went on. “Being in this simulation, you get a glimpse at what someone else’s life might be like.”

And, Metz said, that understanding can help teachers better meet their students’ needs.

“You realize that the student who comes in and falls asleep in class every day might have something going on at home that’s left him feeling exhausted,” Metz noted. “Or there’s not enough to eat at home, so he’s having trouble concentrating.”

Metz said the goal of the simulation is to promote empathy among staff members and to cultivate a more realistic view of what life in poverty is like.

As Superintendent Robert J. Miller put it, the simulation takes the abstract idea of poverty and makes it more real.

“It’s the difference,” he said while watching the simulation, “between just knowing, and actually understanding.”