Herkimer Central School District recognized 54 students in grades 10-12 with Academic H Awards on Tuesday, Dec. 20, for earning an average of 90 or above for every marking period of the 2021-22 school year.

While introducing the awards, High School Principal Mary Tomaso said that some people might attribute the students’ achievement to “just being smart,” but friends, family and teachers know that academic success requires sacrifice, hard work and studying.

“The Academic H is our way of acknowledging your commitment to scholarship,” Tomaso said. “This self-discipline and dedication to learning are personal qualities that will serve you well in your future.”

The ceremony also features a former Herkimer student returning each year to give current students some insights into life after high school. The guest speaker is traditionally the Student Council president from four school years prior, and this year’s speaker was 2018-19 Student Council President Johanna Humble.

‘A path that works for you’

Tomaso said she likes to invite recent graduates to speak in order to give students some extra hope and inspiration that their experiences at Herkimer can lay the foundation for great success if they put their heart and mind into it.

Humble talked to students about how she attended Onondaga County Community College to study interior design, but decided to change to a different career path. She spoke about the challenges of going to college during COVID-19 and having to start taking classes remotely.

She transferred to Herkimer College in fall 2020 and decided she wanted to study law. She later transferred to SUNY Canton, where she majored in legal studies and graduated last week. She pointed out to students the importance of putting thought into your schedule and how that can help you succeed and even graduate faster than the usual timeframe. She also credited taking College Now classes while in high school with helping her accomplish her goal of graduating early.

“I got to graduate early even though I went to three colleges,” she said.

Humble has applied to Albany Law School and plans to become a criminal prosecutor.

She offered students various tips for attending college such as to keep their syllabus, stay organized, ask questions, make use of professors’ office hours, avoid procrastinating and be involved in making your schedule.

“It’s up to you to find a path that works for you,” she said.

After the ceremony, Humble said she hopes students were able to benefit from hearing her story and advice from going through college. Going from a Herkimer student to a college graduate returning to speak to current students went by faster than she realized, she said.

“It doesn’t feel like I graduated three years ago,” she said. “It feels like it was yesterday.”

After the speech, Tomaso thanked Humble for her insights and inspiration.

“You are proof of what I always tell people: Herkimer graduates do great things,” Tomaso said. “I have always admired your work ethic, your commitment to family and your leadership.”

Near the end of the ceremony, high school counselor Carolyn Saugh announced the award winners, and Tomaso handed out the certificates and pins.

Tomaso then congratulated the honorees.

“Your families are proud of you, and so am I,” Tomaso said. “For the 26 of you who are new to this honor, know that as your classes get more challenging and your responsibilities increase, it gets more difficult to earn this distinction.  For the 11 of you who have earned it for three consecutive years, kudos to you. Not only does it represent high honors, but it also represents Herk pride, hard work, a whole lot of heart and hope for your futures.”

The following are the 2022 Academic H Award winners: 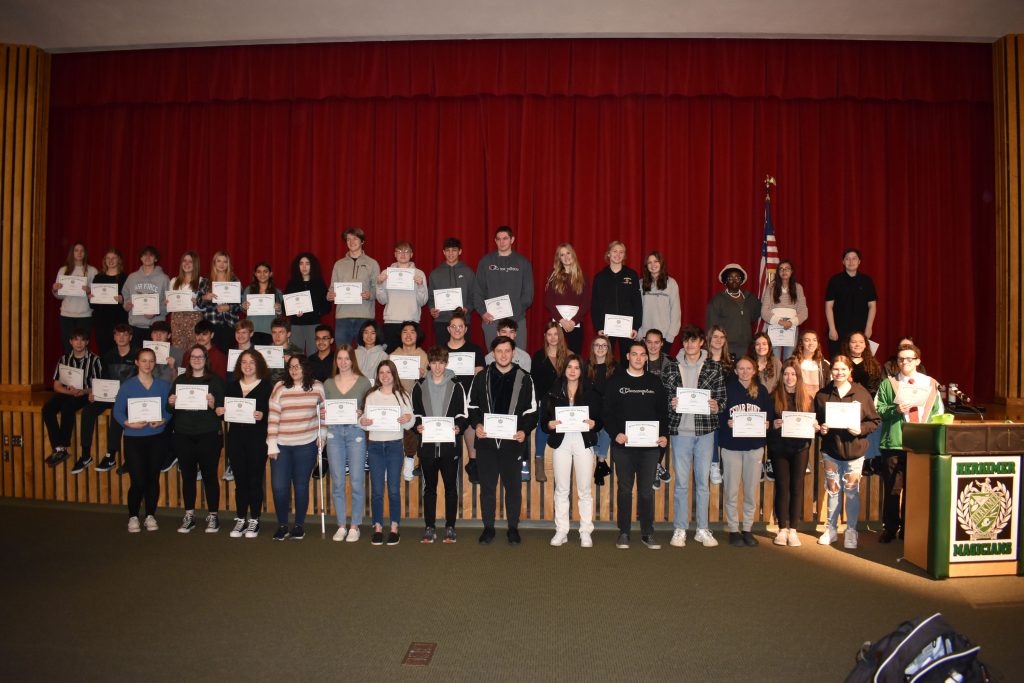 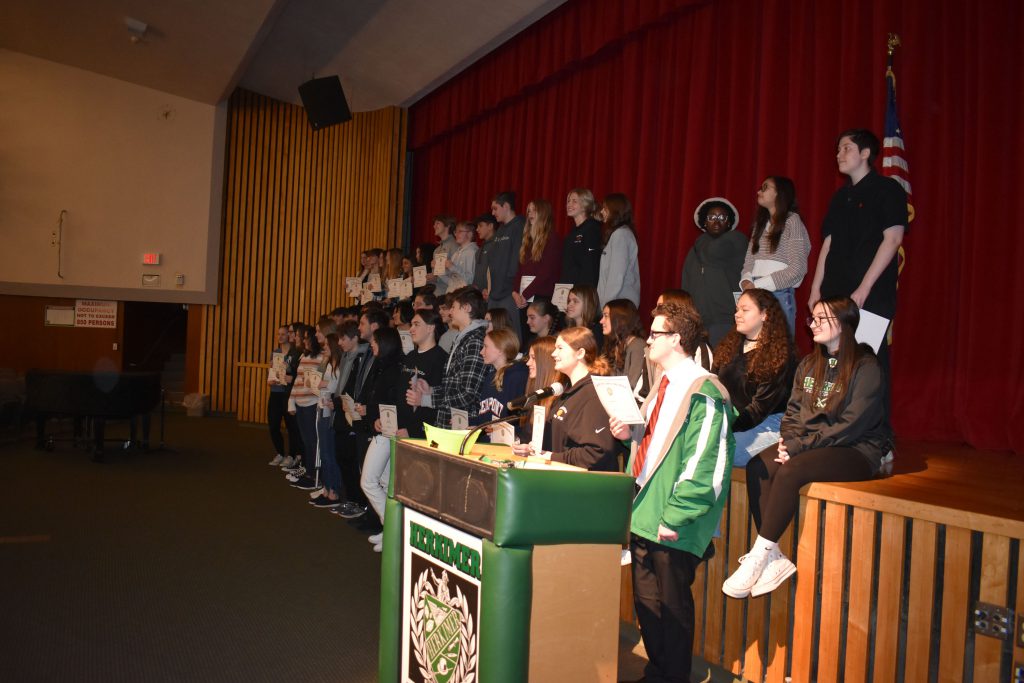 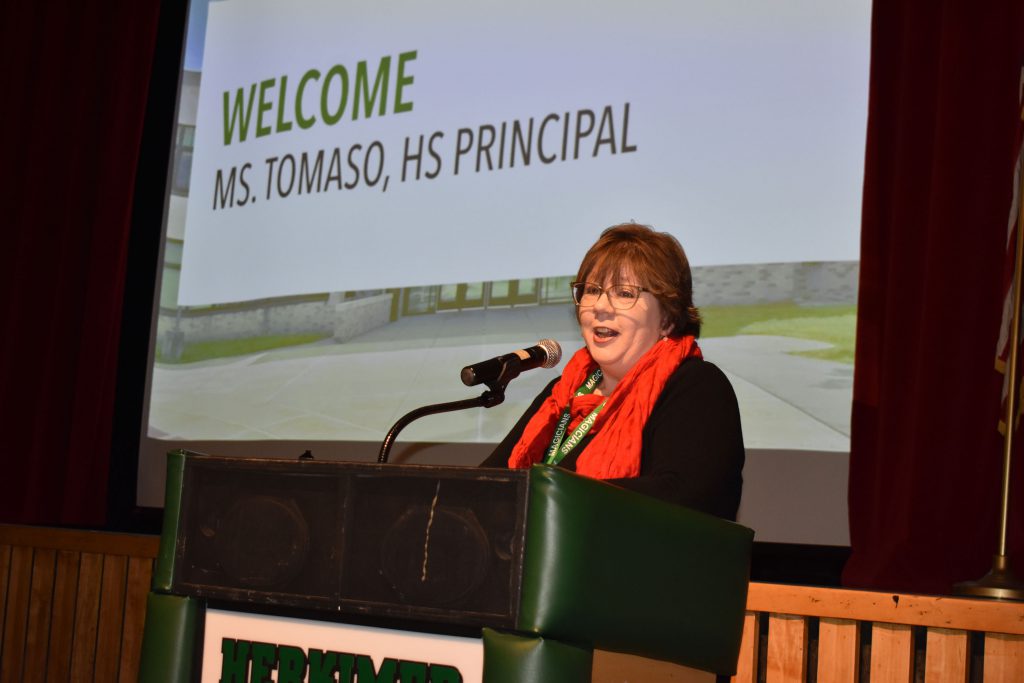 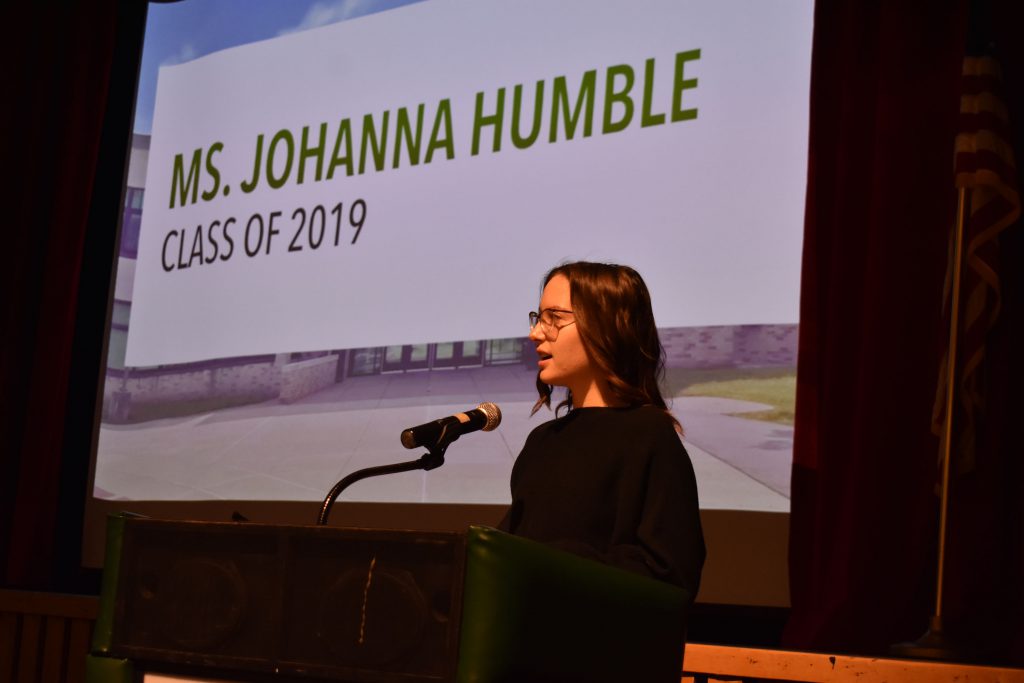