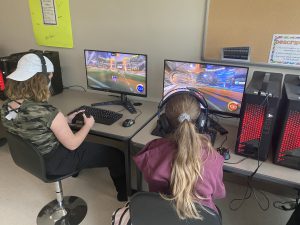 Herkimer Jr./Sr. High School sixth grade student Jacob Petucci loves being in the school’s esports club. He says it’s not only fun, but he enjoys the social aspect of it.

Esports – or electronic organized gaming – has grown exponentially in schools and universities across the country. About 50 students in grades 6-12 participate in the club at Herkimer. The sixth grade club meets one day a week, as does the club for students in grades 7-12.

This year, the students have been playing “Rocket League,” a vehicular soccer video game where they compete against each other in teams of three. 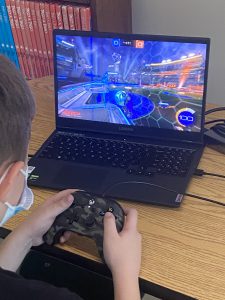 “The teamwork aspect is a really big part of this,” she said. “The students have to assist each other during the games. They love this, and it’s been a big hit.”

In fact, esports involves many components of STEM (Science, Technology, Engineering, Mathematics) including learning about technological proficiency and scientific methodology. According to the North American Scholastic Esports Federation, video games are a product of STEM.

A typical club meeting involves lots of smiles and students asking questions and talking to each other during the game. And of course small celebrations when they win.

Sixth grade student Amelia Hansen says she looks forward to it every week.

“It’s really a nice thing for kids to do things they wouldn’t normally get to do at home,” she said.