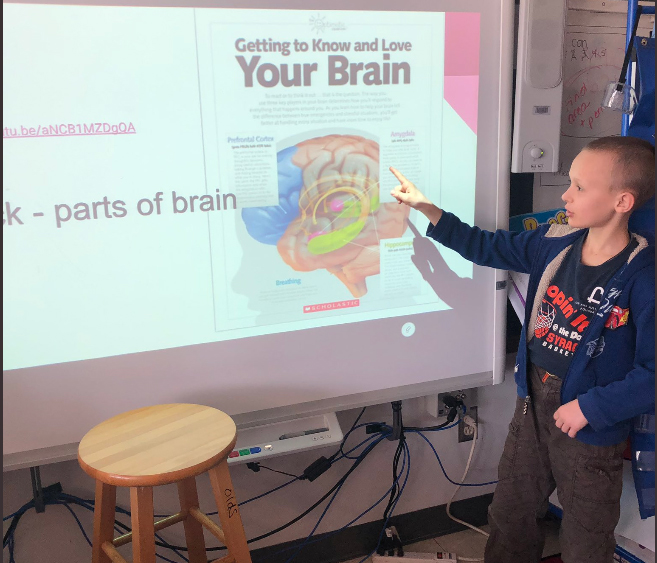 Students in Mrs. Olds’ fourth-grade class had the chance to become teachers recently, when visitors from Camden Elementary School came to Herkimer to learn more about mindfulness.

The Camden Elementary principal and three teachers visited Herkimer following a mindfulness presentation given by Mrs. Olds, with Sherry Spina of Central Valley, at a statewide conference for school administrators in October.

The Camden group wanted to learn more about how to incorporate mindfulness into the classroom — something Mrs. Olds has been doing for at least eight years. So rather than talking to her guests about mindfulness, she decided to let her students do the talking.

“It was the most amazing experience,” Mrs. Olds said. “They loved it — they were so excited to share.”

Mrs. Olds’ students came up with a slideshow to showcase some of the “mindful moments” they do each day in class. Each student took one slide in the slideshow, and stood up to explain and demonstrate a different aspect of mindfulness.

“You’re giving them tools to self-regulate and have some power over their emotions,” Mrs. Olds explained. “It’s a tool for them to have in their toolbox — it’s something they can keep coming back to, even years later.”

Feeling so lucky to have visited @OldsJen classroom today to see mindfulness in action! Thank you for the goodies and for having us! #Mindfulness pic.twitter.com/z44O7Htssg

While mindfulness is having something of a “moment,” Mrs. Olds feels sure that it is more than just a trend.

“Right now there’s a sign out in front of the school that reminds us to exercise every day,” Mrs. Olds noted. “Maybe 20 years from now, that will be a message about the importance of exercising our minds, too.”