As Herkimer Central School District elementary students recently filtered into the cafeteria for an assembly, “Respect” by Aretha Franklin played on repeat over the speakers, signs they walked past in the hallways and cafeteria focused on respect and teachers and staff wore gray shirts with “Respect” displayed on them in green.

During the assembly, students were recognized for respectful behavior, and appreciation was shown for behind-the-scenes heroes including staff members and a local veteran, in honor of Veterans Day.

“I think respect is important because it helps create healthy relationships, it allows for positive communication, it encourages kindness and positivity and it is all encompassed under that one word,” Herkimer Elementary Principal Renee Vogt said.

Herkimer Elementary School put the focus on respect this school year with a theme for the whole year of: “Give respect, get respect.” The goal for teachers, staff and administrators is to teach respect and model respectful behavior throughout the school year, Vogt said. The assembly on Wednesday, Nov. 9, had a theme of “Heroes Behind the Scenes and Veterans.”

After the previous school year focused on various positive character traits, a group of teachers on the School Improvement Team (SIT Committee) got together and decided to concentrate specifically on respect for this school year, Vogt said. The SIT Committee is made up of a grade level representative from each grade, but all are welcome.

Committee members decided on the respect theme because many students need to learn more about respect and how to act respectful, Vogt said.

Part of the focus will shift throughout the year to respectful behavior in various locations in the school such as the cafeteria, bathroom, school bus and more, Vogt said. It’s important to know that both staff and students know the expectations, she said.

Students who receive golden tickets are entered into drawings that will continue to be held about once every two weeks throughout the school year, and winners will receive “brag tags” and have their names and photos displayed on “the respect wall” in the hall.

Blue tickets are added up for each class, and the class that has the most blue tickets going into the next respect-themed assembly wins the Golden Spatula award, which is literally a gold-colored spatula, and holds onto it until the following assembly. One or two assemblies are being held each month.

At the end of the assembly, third grade teacher Ryan Judd’s class was announced as the new winners of the Golden Spatula for receiving 78 blue tickets, and the class got to leave the assembly first as Pegg performed the song again. It was also noted that Kylee Horender’s fourth-grade class came close with 75 blue tickets.

Another segment of the assembly focused on recognizing school staff and how students can treat each of the staff members with respect.

“We have some behind the scenes heroes that make this a great place to be,” Schoff said.

Schoff gave clues, and students guessed which staff members he was talking about, and then the staff members walked out from behind the curtain on stage to reveal themselves. The Elementary School recognized its secretaries, cafeteria workers, maintenance staff, school nurse and school resource officer.

Following a video about Veterans Day, Schoff introduced U.S. Navy veteran Martin Sorensen, of Herkimer, who walked to the front of the assembly with his daughter, Wendy Sorensen-Kovac. Schoff asked all students to stand in respect as Sorensen made his way to the front with a smile on his face, and then “The Star-Spangled Banner” was played. 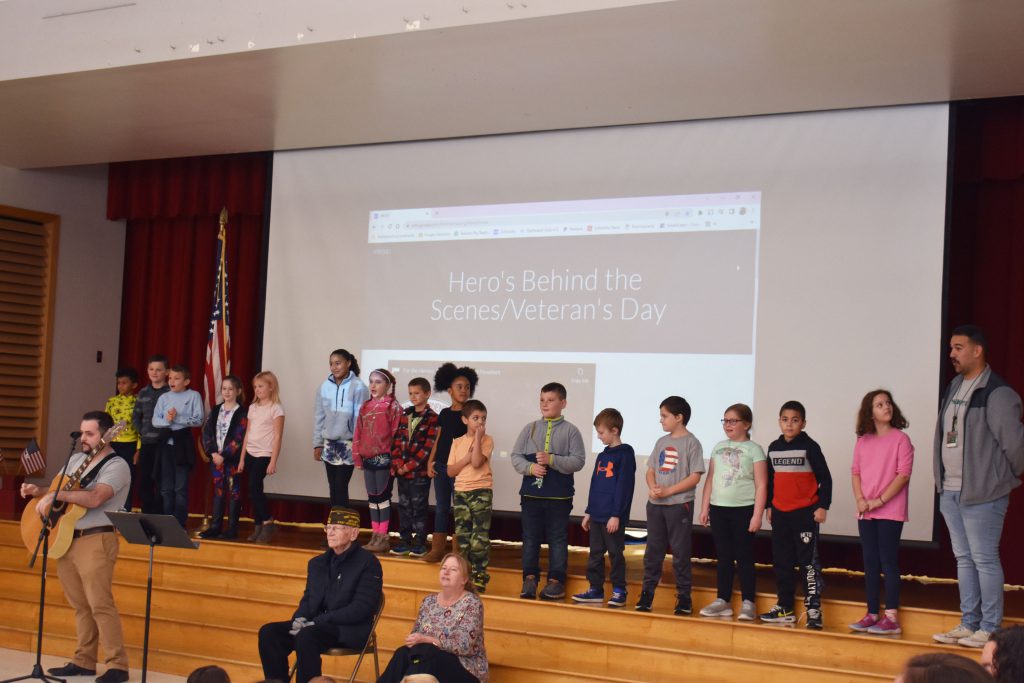 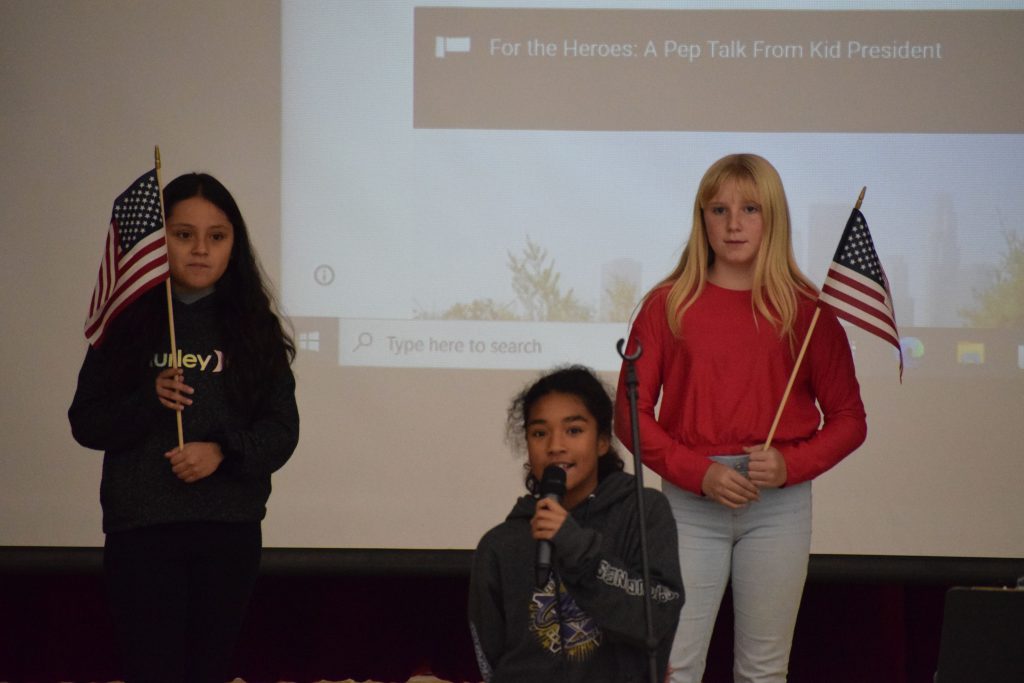 Herkimer Central School District students Cassey Vintimilla and Zoey Slowik were flag holders and Maliyah Brown led the group in “The Pledge of Allegiance” during an Elementary School respect-themed assembly on Wednesday, Nov. 9. 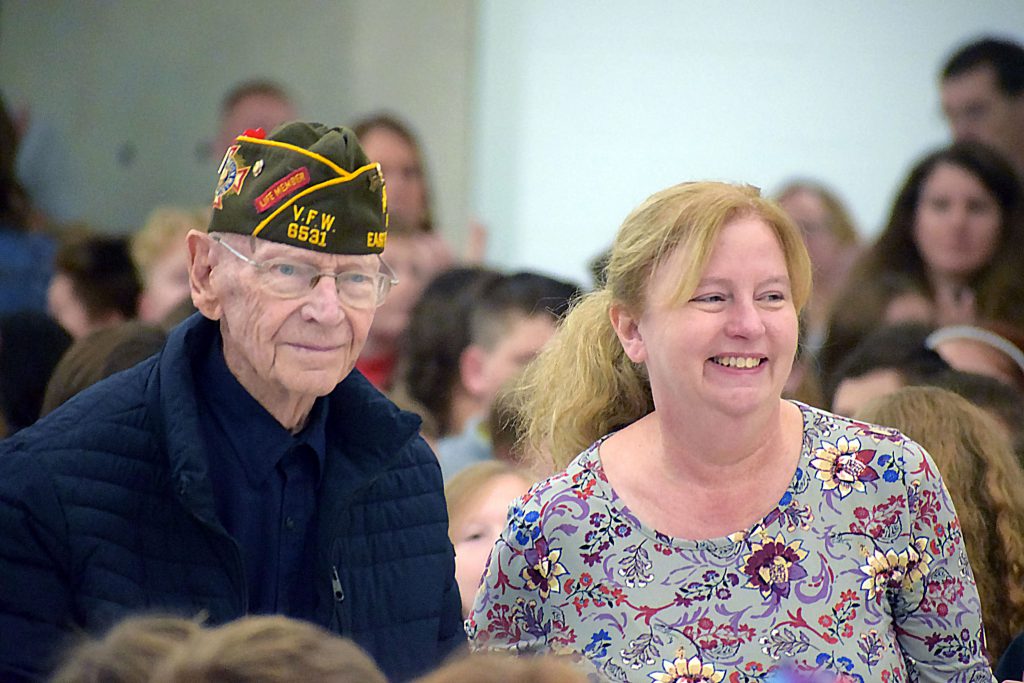 U.S. Navy veteran Martin Sorensen and his daughter Wendy Sorensen-Kovac – both Herkimer residents – walk to the front of a Herkimer Elementary School assembly on Wednesday, Nov. 9, that had a theme of “Heroes Behind the Scenes and Veterans.” 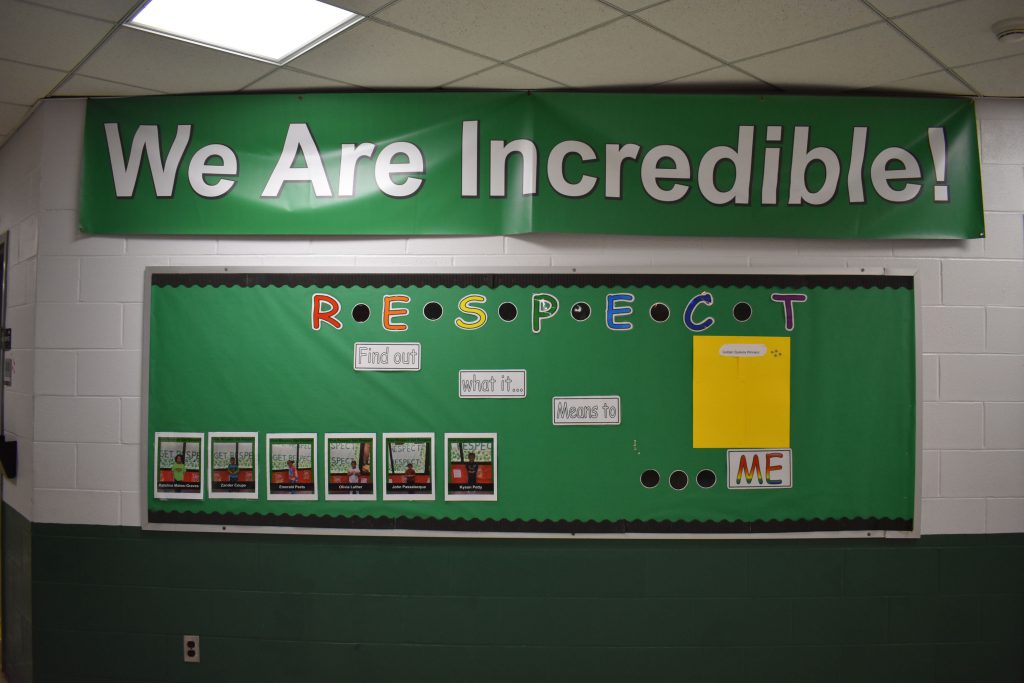 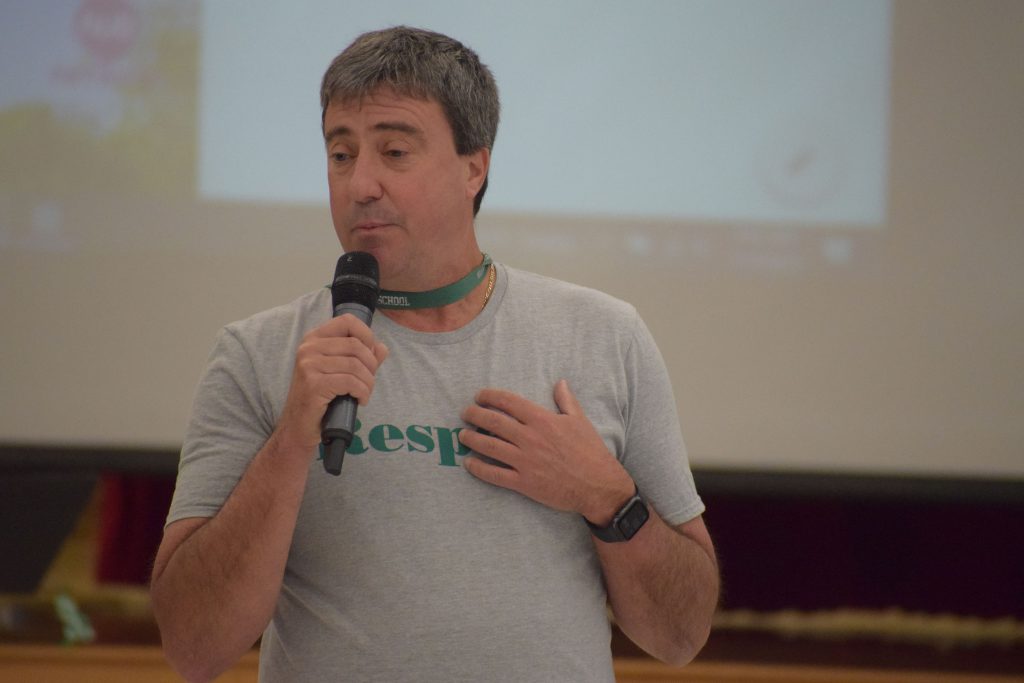 Fifth-grade teacher Rich Schoff speaks to students during a Herkimer Elementary School assembly on Wednesday, Nov. 9, that had a theme of “Heroes Behind the Scenes and Veterans.”

Recognizing behind the scenes school heroes: 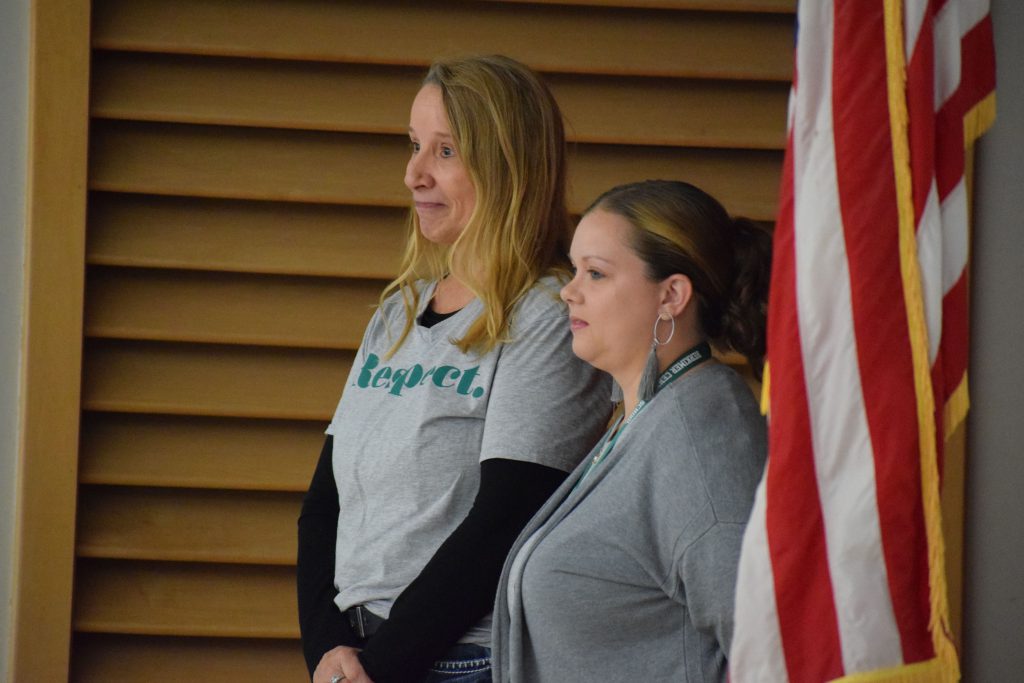 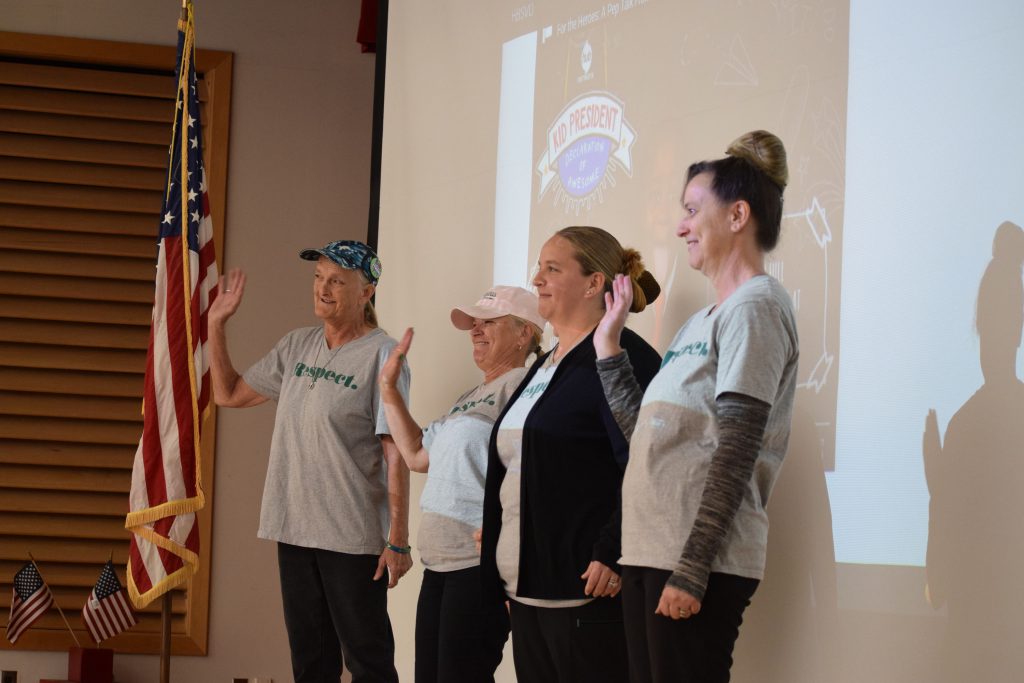 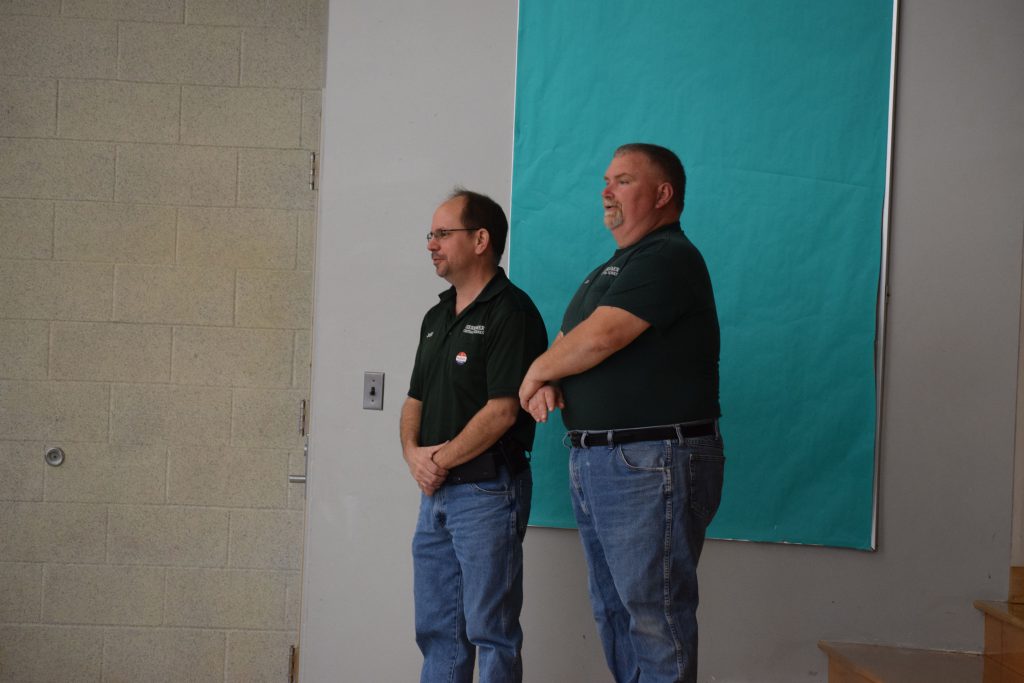 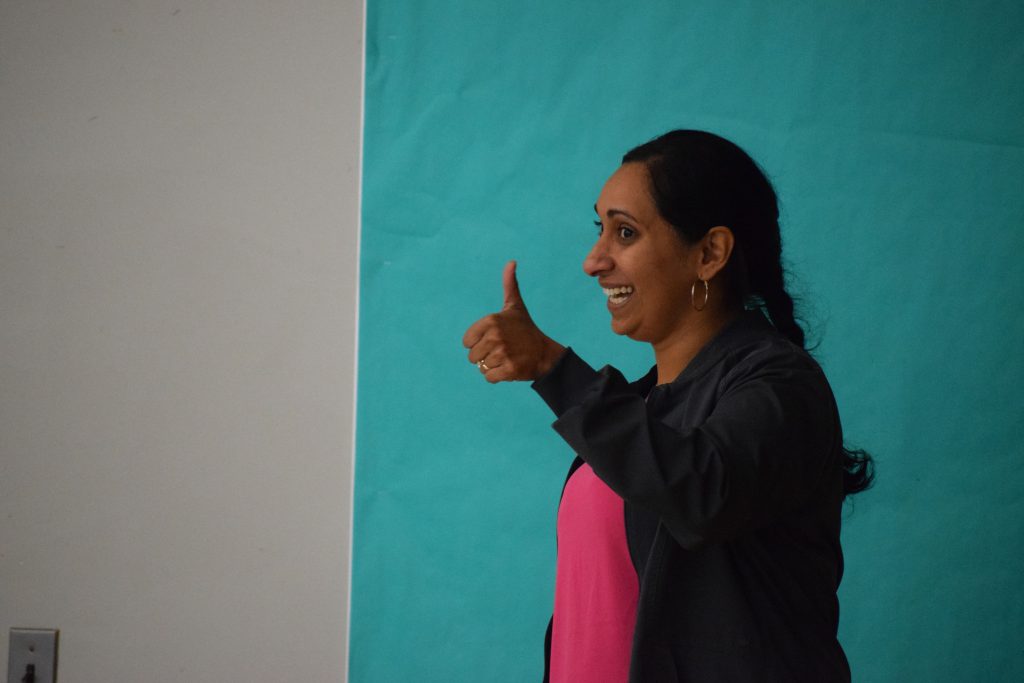 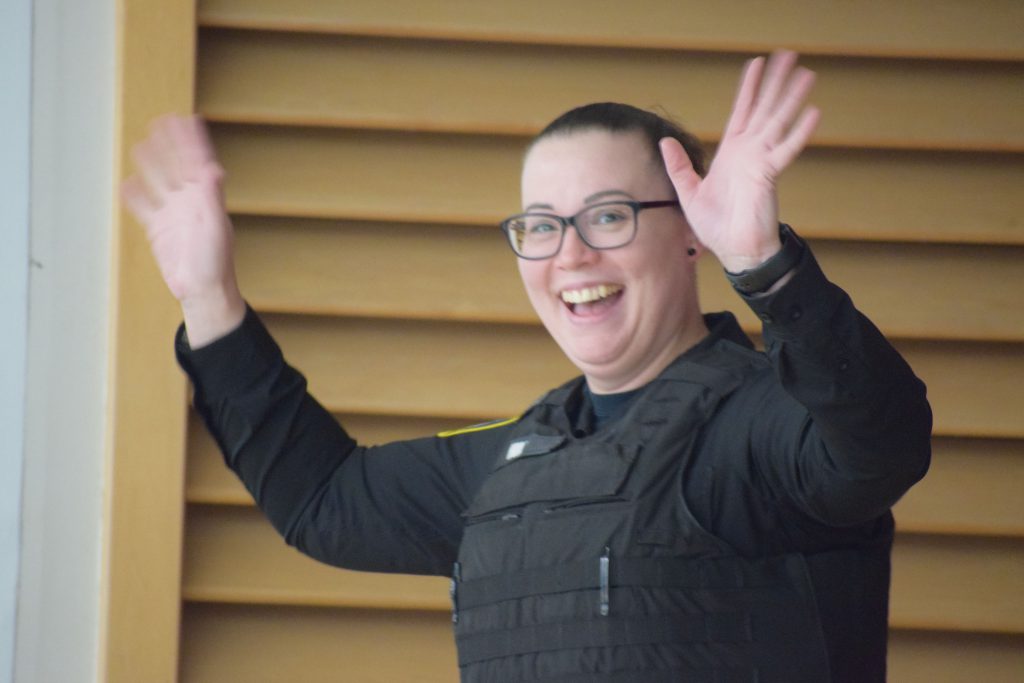