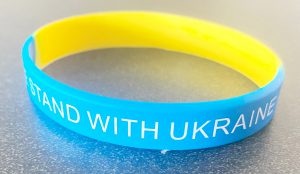 The four students in Laura Scalise’s civics class at Herkimer Jr./Sr. High School have taken a class service project and turned it into a way to benefit both the local and global community.

The students recently began selling $2 bracelets adorned with inspirational messages about the Ukraine. The class is working with the Herkimer Hunger Coalition, who plans to donate all of the money earned to the World Central Kitchen (WCK). The WCK continues to serve millions of fresh meals to Ukrainian families fleeing home as well as those remaining in the country.

At the elementary school, there are also collection jars for coins, which will also be donated to the WCK.

Scalise said her students were looking to take on service projects as they learn about participating in the community and becoming more civic minded.

“It’s so nice to see a lot of people doing a lot of different things to help,” she said. “I think the students felt the need to support those in the Ukraine.”

Senior Chase Arabia-Everson said the entire class looked for a way to help out the Ukraine. They thought bracelets would be a good idea, and eventually ordered 300 from the site, Rapid Wristbands. The class has already sold about 200.

“It’s important to do as a humanitarian gesture, and it all goes toward helping people in need.”

Meanwhile, the language club at the 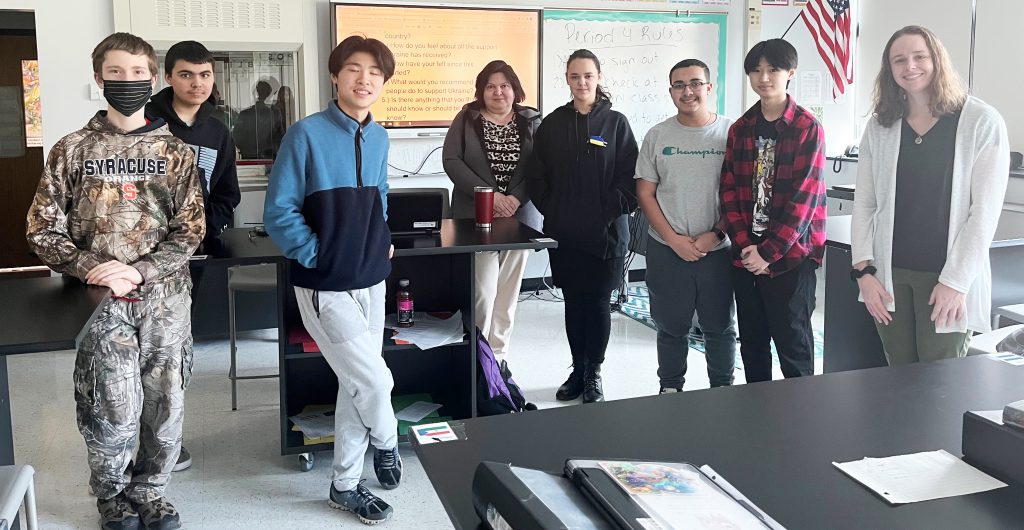 high school was looking for ways to understand and support the situation in Ukraine, and invited senior and Ukraine-native, Tetiana Chmut, to share her perspective. The class also hosted an interpreter from The Center in Utica.

“Tetiana brought a new perspective to our club as she highlighted personal narratives and the emotional impact that this situation has on residents in both Ukraine and Russia,” said advisor, Chanel Meyer.

“Additionally, she shared information about her culture by explaining her experience as a student in Ukraine, Ukrainian cuisine, and where she grew up.”