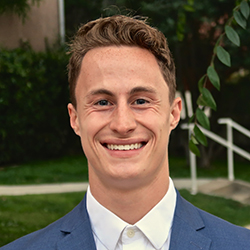 The Herkimer Central School District Spotlight showcases student, graduate and staff member successes. If you know someone who should be in the Spotlight, please fill out this Spotlight nomination form.

Brennen Thompson is a 2015 graduate of Herkimer High School.

What have you been doing since you graduated?

I’ve been busy! I was lucky to be able to go St. John Fisher, where I got my degree in history, mino red in marketing, and played football there. I was able to be elected captain of the football team and had a lot of success, had a ton of fun and made a lot of great people.

I applied for an internship with the Walt Disney Company in Florida, and moved down there probably a week after graduating. Then after my internship, I had a friend who lived in California who reached out and said he had a job opening at one of the best advertising agencies in the world. Somehow they hired me, and I’ve been here since December.

Did anyone from Herkimer Central School District influence you in becoming who you are today?

The biggest thing with being from a small town is not being afraid to think big and to dream. It might be hard, but you can truly do anything you want to do, and there’s a lot of people around who can help. Don’t be afraid to chase your dreams.