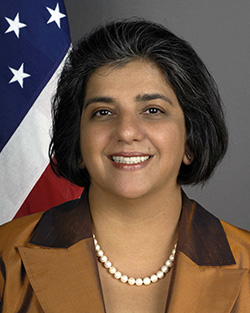 Pasi is a 1980 Herkimer High School graduate who has spent nearly three decades in the Foreign Service.

Geeta Pasi was confirmed as U.S. ambassador to Chad, in northern central Africa, in June 2016. She has been a member of the Foreign Service since 1988, and has served on overseas assignments in Cameroon, Romania, Ghana, India, Bangladesh, Djibouti and Afghanistan.

Pasi received a Bachelor of Arts degree in economics from Duke University in 1984 and a Master of Arts in French studies from New York University in 1986. She speaks French, Hindi, Romanian and German. Before joining the foreign service, she worked as an institutional financial market researcher in New York City.

Pasi told the Times-Telegram that she was inspired by her teachers at Herkimer High School, including by a Spanish teacher who told spoke about her experiences in the Peace Corps. Pasi said she tells the people she meets abroad that she is from Herkimer, where her family settled while she was in elementary school.

Read more: Herkimer graduate to be sworn in as US ambassador to Chad