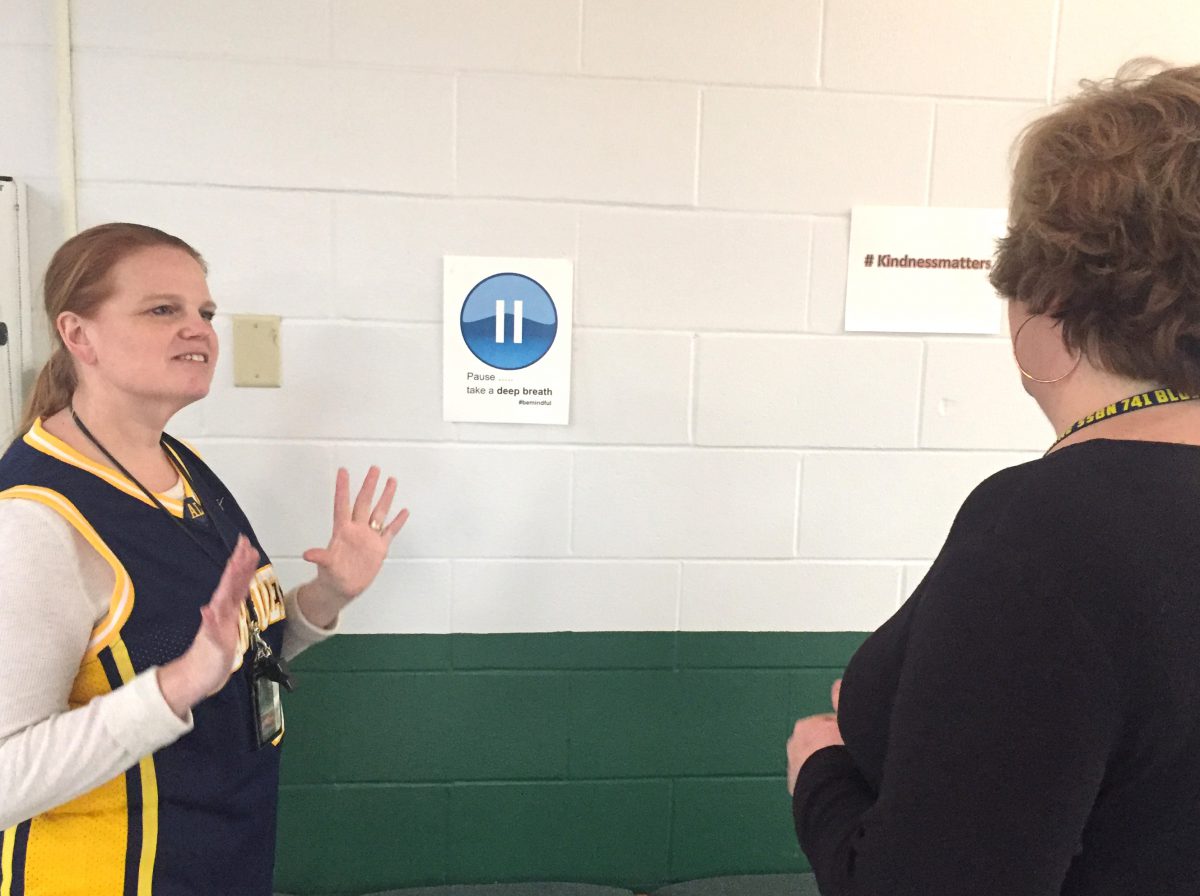 Jen Olds wants you to breathe.

On a recent Friday afternoon, Olds stood in front of a room full of her fellow teachers at Herkimer Elementary and led them through a breathing exercise designed to increase focus and become present.

Olds has been leading an effort to bring mindfulness into the lives of Herkimer Elementary students and staff for several months, and the effort has been gaining momentum. In January, Olds was co-presenter of a program at the Mohawk Regional Teacher Center on the subject of “Mindfulness in the Classroom.” And more than 20 Herkimer Elementary staff members stayed after school on a recent Friday to hear tips and brainstorm ideas for how to share the idea of mindfulness with more students.

When asked to explain what mindfulness is all about, Olds begins by explaining what it’s not.

“First of all, it’s not meditation; it’s not based on any religious belief or philosophy,” Olds explains. “It’s secular, and it’s science-based. Studies have shown that brains are not able to process new information when in a state of fight or flight. Being mindful is a tool that can tame those emotions.”

Secondly, Olds notes, mindfulness is not about clearing your mind, or getting rid of thoughts and emotions. Instead, she says, it’s about self-regulation: teaching students (and adults!) to “respond, not react”; to recognize their thoughts and emotions, and to make conscious choices about behavior.

The benefits of mindfulness are well-documented, and it has been growing in popularity, particularly in schools. At Herkimer Elementary, Olds has organized “Mindful Mondays,” in which teachers and students include messages about mindfulness during the morning announcements.

And throughout the school building, there are “pause buttons” — small signs with an image of a button and a mindfulness slogan — displayed to remind students to take time to pause throughout their day and just breathe.

“We’re giving kids the tools and the knowledge to make them aware that they are in control,” Olds explained. “We’re giving them an awareness of how their brains work, and helping them see that their thoughts and emotions don’t have to control them.”

The mindfulness initiative also ties in with character education programs underway throughout the school. In December, the school focused on “kindness”; in February, the theme will be “friendship.” Among other activities, staff will be leading students in collecting donations for a Chemo Comfort Bag drive, and raising funds for the American Heart Association, as reminders to think of others and look for ways to be helpful.

And throughout it all, Olds and her fellow teachers will be reminding students to pause, focus — and breathe.