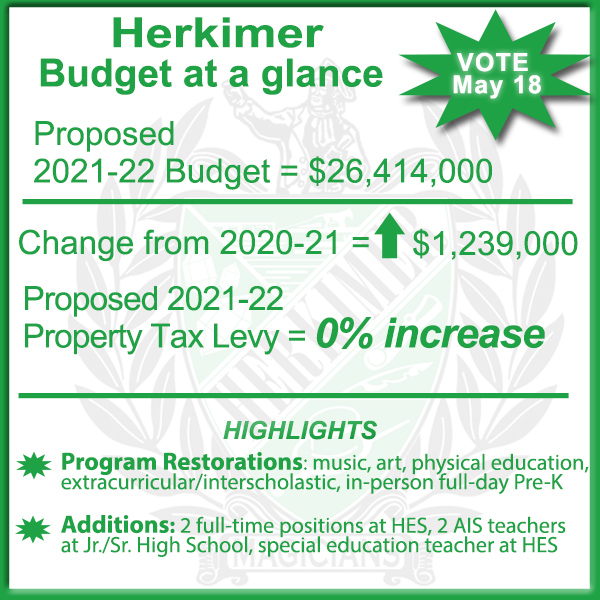 On Tuesday, May 18, district residents will vote on a $26,414,000 proposed budget for the 2021-22 school year. This proposal would increase spending 4.9 percent, or $1,239,000, and would result in a 0 percent tax levy increase. The 0 percent tax levy increase is, however, above the district’s allotted tax levy cap of – 4.67% as defined by the state’s tax cap legislation, and therefore, a supermajority of voters (60 percent) is required for budget approval.

Voters will also elect three representatives to the Board of Education, and will vote on the public library budget and library board of trustees.
Restoring Programs

Herkimer was open for in-person learning during the 2020-21 school year while continuing to offer all sports, and district leaders have continued to look for ways to enhance current programming during the budget development process. The budget proposal would preserve existing programs and restore music, art, physical education, extracurricular/interscholastic programming, and in-person full-day Pre-K. It would also add two full-time elementary positions to maintain class sizes for COVID restrictions.

The main growth in the budget can be attributed to employee salary and benefit increases, pupil transportation costs, and BOCES expenses.

The budget proposal also includes about $1.1 million for the first year of a five-year contract with Birnie Bus to continue providing transportation services, and a $100,000 capital outlay project for cameras, computer infrastructure, and control work (e.g. thermostats) at the elementary school. The bid submitted by Birnie Bus was $1.25 million less than the next bidder.

Meanwhile, the district also has three years to spend $4.8 million in Federal funds, which must be used in specific areas. The district plans to use it for restoring in-person instruction, academic gap closing, social emotional support, summer programming, and expanded school day programs.
District leaders also expected to propose a tax levy limit override this year because of a debt service anomaly (see story on page 2). It was planned for the last several years as a part of a long-term debt service stabilization plan.

“Because of our negative tax levy cap determined by the state, we knew we were going to have to override the cap this year,” said Superintendent Robert J. Miller.

“However, we’re very thankful for a 14.5 percent increase in state aid and additional federal aid which we can use to fill our budget gaps and offer additional programs that will benefit our students.”

When and where is the vote?

The school budget vote will take place from noon – 8 p.m. Tuesday, May 18, in the Herkimer Jr./Sr. High School Library.