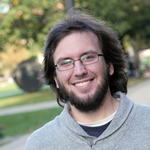 My favorite high school memories were the music field trips to Virginia Beach, Cleveland, and Toronto. It was great to go on a road trip with a big chunk of the class, compete at a music festival, and visit an amusement park.

What have you been doing since you graduated from Herkimer High School?

After high school, I attended Utica College where I received a B.S. in physics and a B.A. in mathematics. After Utica College, I attended graduate school at Syracuse University where I studied gravitational wave astrophysics and worked with the LIGO Scientific Collaboration in the first direct detection of gravitational waves. I’ll be granted my PhD in Physics this summer. In August, I’ll be joining the California Institute of Technology in Pasadena, CA as a Postdoctoral Scholar where I will continue my research on gravitational wave astrophysics.

Did anyone from Herkimer Central School District influence you in becoming who you are today?

There are many teachers that I think had a significant influence on me. Mr. Krause was my choir teacher from 7th-12th grade. He is a constant source of wisdom and is still the most patient person I have ever met. I was always interested in science, but Mr. Nicklaw was the one that helped me decide to choose physics as a major going into college. Mr. Turner showed all of us that we would have to be independent and accountable once we left high school, whether it was to go into the workforce or to attend college.

My advice to current HHS students is to understand your strengths and weaknesses so that you can become a well-rounded person and to always try to have fun no matter what you’re doing.