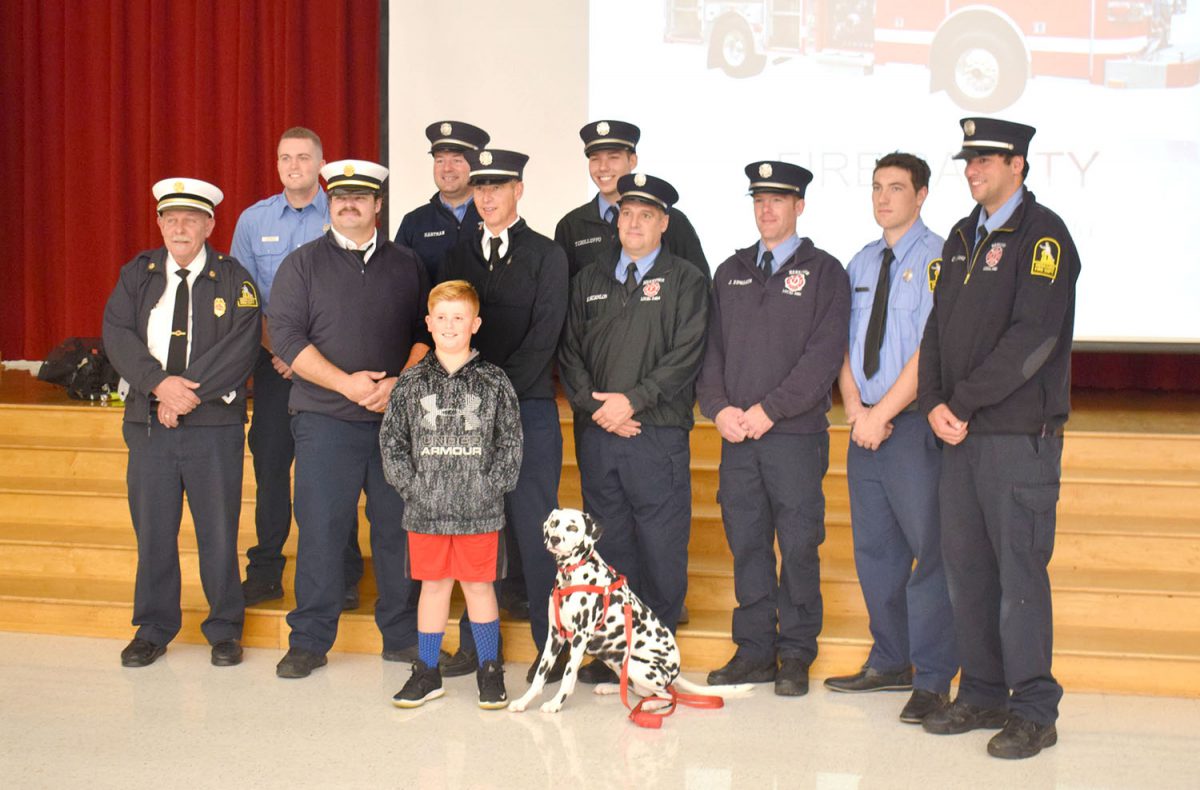 One student’s donation started an effort that turned into several hundred new smoke detectors for homes of elementary students in Herkimer.

Brett said riding a firetruck to school was “pretty cool.” Seeing the community response to his donation and that it ultimately resulted in people getting smoke detectors in their homes feels “pretty amazing,” he said.

“I just want everyone to be safe.”

Brett donated $250 of birthday money to the Herkimer Fire Department in August because his classmate was one of three boys who lost their lives in a January fire in the village. The department’s union, Local No. 2484, matched his donation and sought further donations. Donations were received from community businesses and individuals, and Guardian Protection donated 600 smoke detectors through an anonymous donation made to the organization, Herkimer Fire Department Deputy Chief Michael Moody said. 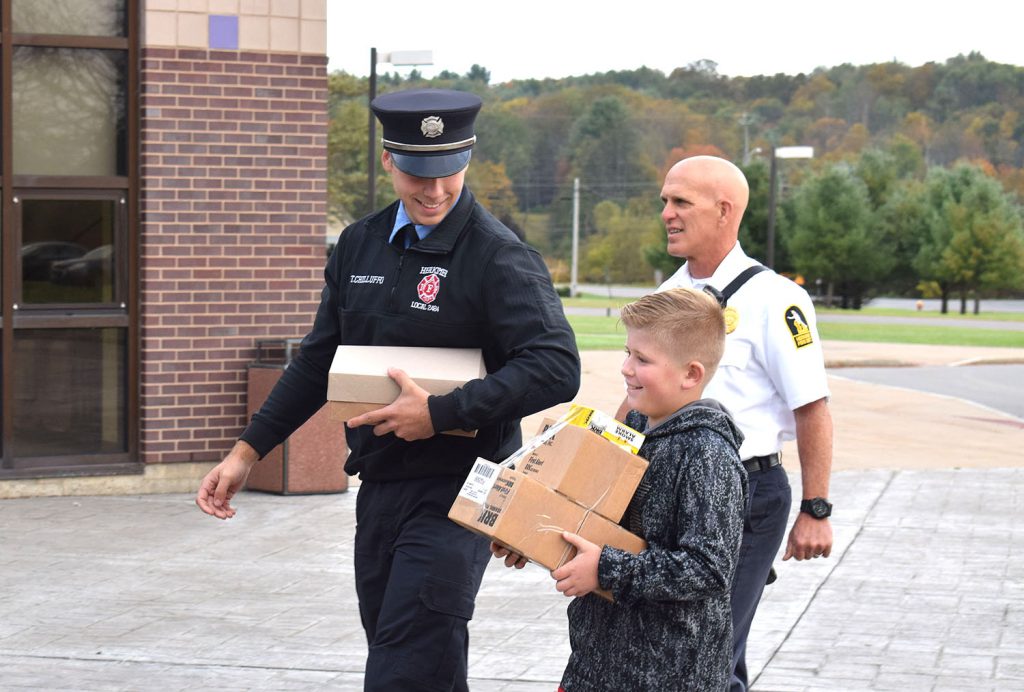 The 600 smoke detectors were delivered to the Herkimer Elementary School, and smoke detectors from other donations will be delivered sometime in the next couple of weeks to St. Francis de Sales Regional Catholic School in Herkimer, Moody said.

Moody pointed out that Herkimer firefighters respond to about 2,000 calls per year and find many homes without smoke detectors or with an inadequate number of smoke detectors. He said the response started by Brett has been very helpful.

“It’s awesome,” Moody said. “The thing people don’t realize about smoke detectors is they buy the people in the house and emergency responders time because they’re an early warning device.”

Herkimer firefighters also attended two assemblies that Herkimer Elementary School hosted on Wednesday, Oct. 9, for National Fire Prevention Week – one for third grade to fifth grade and then one for prekindergarten to second grade.

Herkimer Elementary School Principal Renee Vogt called Brett up to the front to start both assemblies.

“He didn’t think about himself; he thought about other people,” Vogt said, during the first assembly. “So congratulations to Brett because that is a very good character trait.”

Vogt informed students that the smoke detectors would be delivered to their classrooms later that day.

“Take them home tonight,” she said. “Give them to your parents, and put them up.”

Richard Mathy, a technology integrator at Herkimer Elementary School and an Old Forge firefighter, then put on a fire safety presentation with a Dalmatian named Zelda. 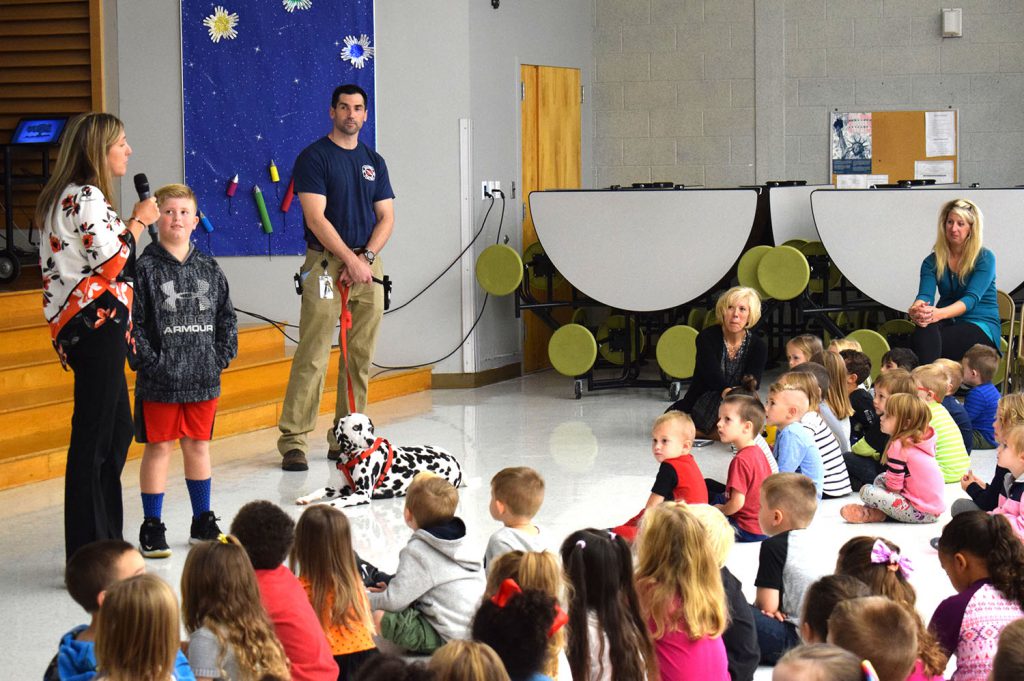 ‘We’re all about keeping you guys safe’

Mathy gave students a variety of advice such as recognizing what their smoke detectors sound like when they go off, making sure they have working batteries and knowing what to do to get out of the house if there is a fire.

“Ask your parents where the smoke detectors are in your house,” Mathy said. “They should be on every level of your house.”

As part of Mathy’s presentation, Herkimer firefighters Mitchell Scherer and Robert Davenport put on their full gear and breathing equipment, so students could recognize how they would look and sound when responding to a fire.

Mathy also showed his own equipment and described some of the various aspects of a firefighter’s job — including conducting rescues and providing education.

“We’re all about keeping you guys safe,” he said.