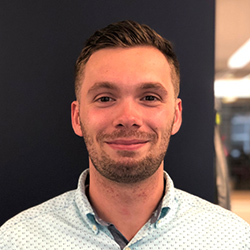 The Herkimer Central School District Spotlight showcases student, graduate and staff member successes. If you know someone who should be in the Spotlight, please fill out this Spotlight nomination form.

Michael Ferrucci is a 2013 graduate of Herkimer High School.

Getting tackled by the entire varsity soccer team as I was crowned homecoming king in 2012. I still often joke that this moment was my “peak.”

What have you been doing since you graduated high school?

Since graduating HHS, I attended and graduated from SUNY Oneonta with a bachelor’s degree in business economics with a marketing concentration, as well as a minor in music performance. Upon graduation, I moved to New York City to work as an account executive on the sales team at Yelp. After a year with Yelp, I made a slight career change to work an Microsoft’s account at Carat, a global advertising agency also located in New York City, where I still work.

Aside from my professional career, I have also continued to play music with my rock band from high school, Atticus Finch. We recently got back from a small tour in California, where we were able to share our music and stories with new people on the West Coast.

Did anyone from Herkimer Central School District influence you in becoming who you are today? If so, in what way?

While it is difficult to pinpoint one in particular, since there were so many great teachers and leaders at HHS during my time there, there are definitely a few I can highlight. John Krause and David Fox stick out the most to me, as I was heavily involved in the music department. While I am not playing music professionally for a living, the morals and lessons I learned from them have translated into the rest of my professional career. I also learned a lot about the value of hard work from Coach Nasypany and Coach Meinenger from playing on their teams.